The NFL Draft is upon us, with the first round kicking off on ABC, ESPN, & NFL Network tonight at 8 pm ET. Our beloved college football stars are moving on to shine on the biggest stage. There will be plenty of hugs and cries from these young athletes as they hear their names called by NFL Commissioner Roger Goodell. For fans, it’s much more relaxing, cracking open that bottle of GameDay vodka with the hopes your team picks the next NFL superstar.

The Ravens are our first partner on the clock. Last year, there was plenty of Super Bowl talk with the team led by star quarterback Lamar Jackson. Unfortunately, the injury bug decided to drop into Baltimore and wreak havoc on the roster, leading to an 8–9 record and the 14th overall pick. With this pick, the Ravens will focus on adding an impactful player to their defense or getting younger on the offensive line.

Saints fans are lucky tonight as they could see their team pick twice! Another great reason to make your GameDay cocktail a double. The team recently made a trade to acquire an additional first-round pick in tonight’s draft. It’s a big moment for new head coach Dennis Allen as this will be his first draft without the legendary Sean Payton. With the new regime running the show in the Big Easy, look for the Saints to potentially swing for the fences by adding a new quarterback to challenge current starter, Jameis Winston. There’s also the need for a new left tackle and additional weapons at wide receiver.

After landing quarterback Mac Jones in last year’s draft, the Patriots can focus on improving the rest of the roster. The need to draft speed and youth to their defense was apparent after the Buffalo Bills beat them 47-17 in the playoffs. Coach Bill Belichick and the front office will have some tough choices tonight, but going with a linebacker or cornerback with the 21st overall pick is likely. They could also take a shot at a pass rusher or another receiver for Jones.

The Bills have a complete roster that lacks any real needs. However, they could add a player that helps get them over the hump with the right choice in the first round. Last year, they made it to the AFC Championship game, one win away from the Super Bowl. A cornerback makes sense on defense with star Tre’Davious White recovering from a knee injury. The team could also look to add another offensive playmaker to their high-scoring offense led by quarterback Josh Allen.

Two of our partners do not have first-round picks in this year’s draft. There’s a slight chance they trade up to potentially draft tonight, but that’s a slim case. I’m sure Broncos fans are happy not to have a pick after trading it away to acquire star quarterback Russell Wilson. Colts fans didn’t have a choice tonight because of the trade for quarterback Carson Wentz last year. Wentz is no longer with the team after being traded again.

True football fans love the draft because it gives them a taste of football and the NFL in spring. It’s the perfect excuse to enjoy some GameDay vodka while cheering on your team. One of the players your team drafts this weekend could become your favorite or have a statue in front of the stadium one day. The draft is three days long, with the first round being tonight, the second and third rounds being Friday (7 pm ET start), and the fourth through seventh rounds running most of the day Saturday (Noon ET start). Below is the draft order for all 32 first-round picks: 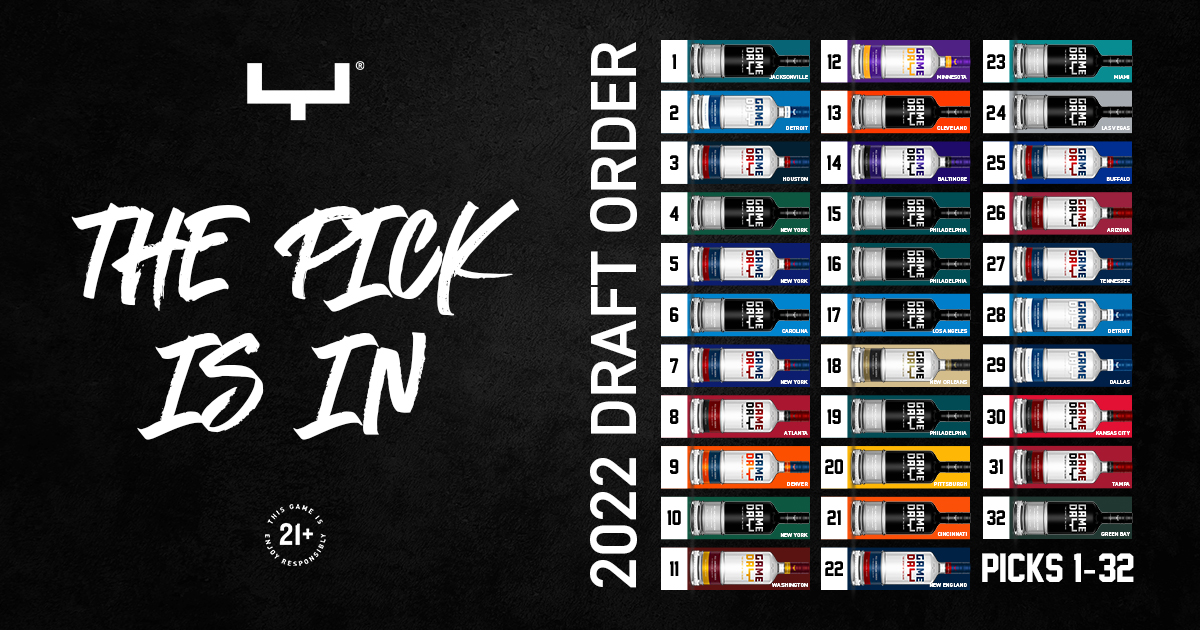