There were social media leaks, assumptions, and controversy but the NFL schedule has finally been released. Fans at last have a view of what their 2022 season looks like for their favorite team. Some fans are probably happy with their schedule while some feel the league might’ve shafted them. Either way, we know who each team will play and when.

Let’s dive into how the 2022 season looks for our partners and call out some of their key matchups. 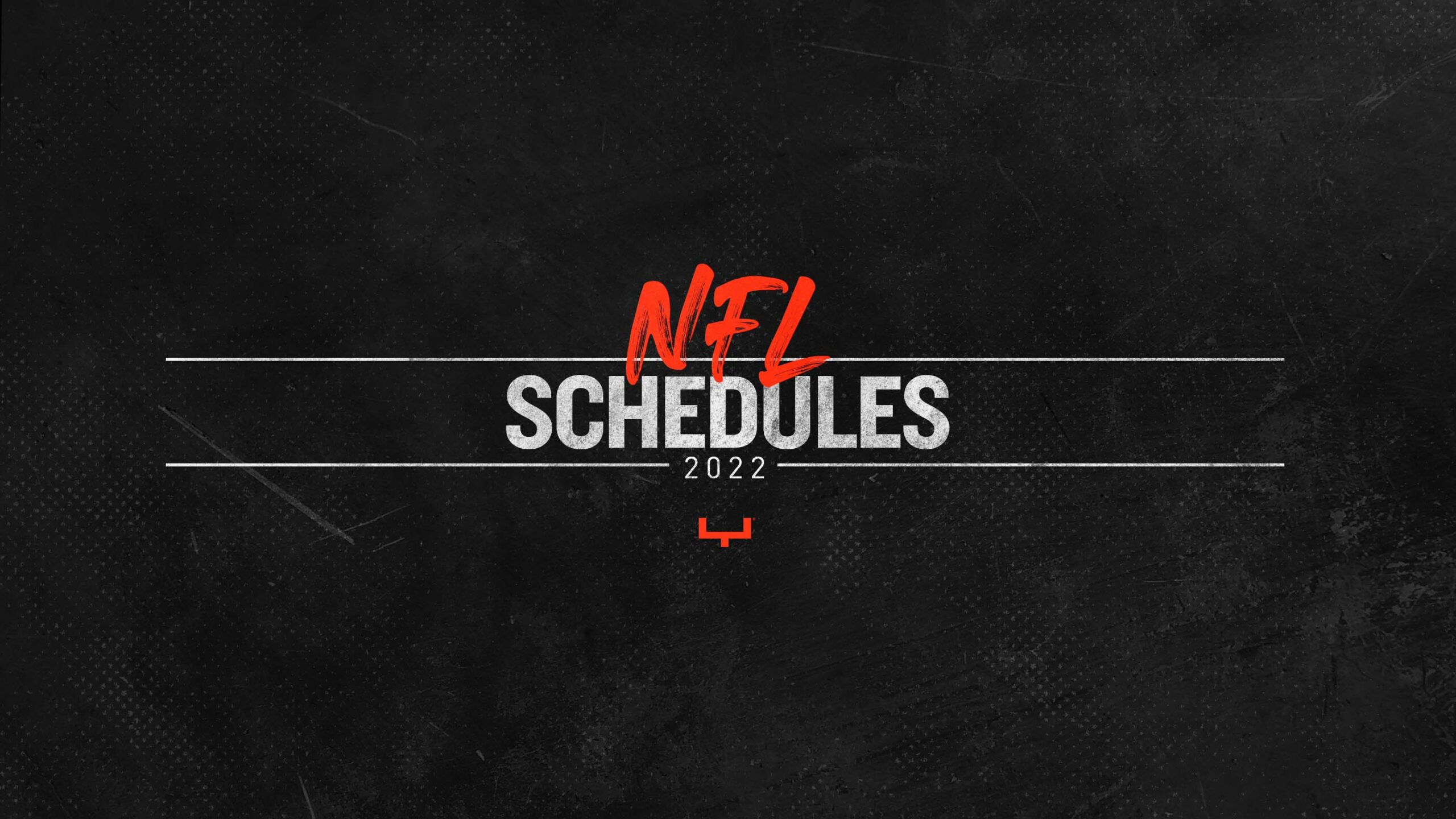 The Ravens better hope they have the AFC East number this year because their first four games are against the New York Jets, Miami Dolphins, and two GameDay vodka partners–the New England Patriots and Buffalo Bills. You better believe the GameDay will be flowing for those Sundays. Following the Bills game, the Ravens play their first primetime game against their division rival, Cincinnati Bengals. In addition to the Sunday Night Football game, the Ravens are scheduled to play two more night games, one against the Tampa Bay Buccaneers in Week 8 and another in Week 9 on Monday Night Football against fellow GameDay partner the New Orleans Saints. After two tough road games under the lights, the team gets a bye for Week 10 to rest and recover. Down the final stretch of the season, the Ravens face all of their division rivals at least once and face a tough matchup against the Denver Broncos, another GameDay partner. It won’t be an easy season for the flock this year, but it will be a fun one. The full schedule is pictured below. It’s a big year for the Buffalo Bills as they head into the season with Super Bowl aspirations. They will be tested early going on the road in the first game of the NFL regular season against the defending champs the Los Angeles Rams. After that, it won’t get any easier as they head back home to play on Monday Night Football against the Tennessee Titans. GameDay vodka fans will have an opportunity to pour an extra drink when the Bills head to Baltimore to face another partner in the Ravens for a big Week 4 matchup. The fun doesn’t stop there–one game circled on all NFL fan’s calendars is the Week 6 matchup between the Bills and Kansas City Chiefs after their back-and-forth playoff battle in the Divisional Round last year. The good news for the Bills is after that game they get a Week 7 bye. Unfortunately, they roll out of the bye week and have to face a tough Green Bay Packers team on Sunday Night Football. Good teams like the Bills will get their opponent’s best effort each week and that will be most evident on Thanksgiving day when they travel to Detroit to face the Lions. Put the turkey in the oven, make a GameDay Hail Mary, and turn on the Bills game. Filled up on Thanksgiving dinner the Bills will need to come ready to face their division rival the New England Patriots in Week 13 under the lights of Thursday Night Football. These two GameDay partners will also face off in the final week of the season to possibly determine the winner of the division. The Bills full schedule is pictured below. 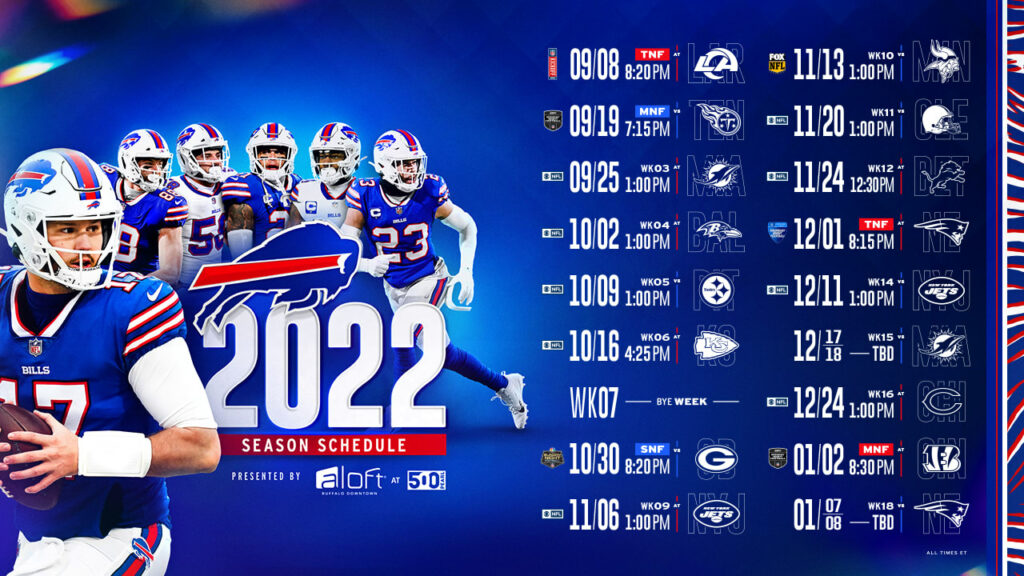 Hopes are high in Mile High as the Broncos have a loaded roster with a new face under center in Russell Wilson. The Broncos will go on the road in Week 1 to face Wilson’s former team, the Seattle Seahawks, on Monday Night Football. After starting the season on the road the Broncos head back home to play the Houston Texans and San Francisco 49ers. They also have an important home game in Week 5 against the Indianapolis Colts as that’s their first matchup of the season against another GameDay partner. Following the clash between two great GameDay partners, the Broncos head to Los Angeles to play the Chargers on Monday Night Football in a must-win division game. In Week 8, Broncos fans will need to wake up early (7:30 am MDT) because their team is across the pond in London to face the Jacksonville Jaguars. Lucky for the team they get a much-needed bye week following that game to work out some of their jet lag. Finishing the season strong will be a must for the Broncos as they are in a division that is expected to be very close. Fans get another great GameDay clash when the Broncos face the Baltimore Ravens on the road in Week 13. After the trip to Baltimore, the Broncos head back home to face the Chiefs in a Sunday Night Football battle. The Broncos full schedule is pictured below. After barely missing the playoffs last year, Colts fans are ready to put that season in the rearview. The team goes on the road to start the 2022 season with back-to-back division games against the Houston Texans and Jacksonville Jaguars. Following that road stint, the team has two very tough home games against the Kansas City Chiefs and Tennessee Titans. The good news is the Colts get two games against GameDay vodka partners in Week 5 on Thursday night against the Denver Broncos and on the road in New England vs. the Patriots. Later in the season, the Colts get back-to-back primetime games. In Week 12 they face the Pittsburgh Steelers on Monday Night Football, followed by a Sunday night matchup against the Dallas Cowboys on the road. Those two-night games earned the Colts a Week 14 bye too. Before the season ends the Colts get one more primetime game, Week 16 against the Los Angeles Chargers on Monday Night Football. Below is the full Colts schedule for the 2022 season. 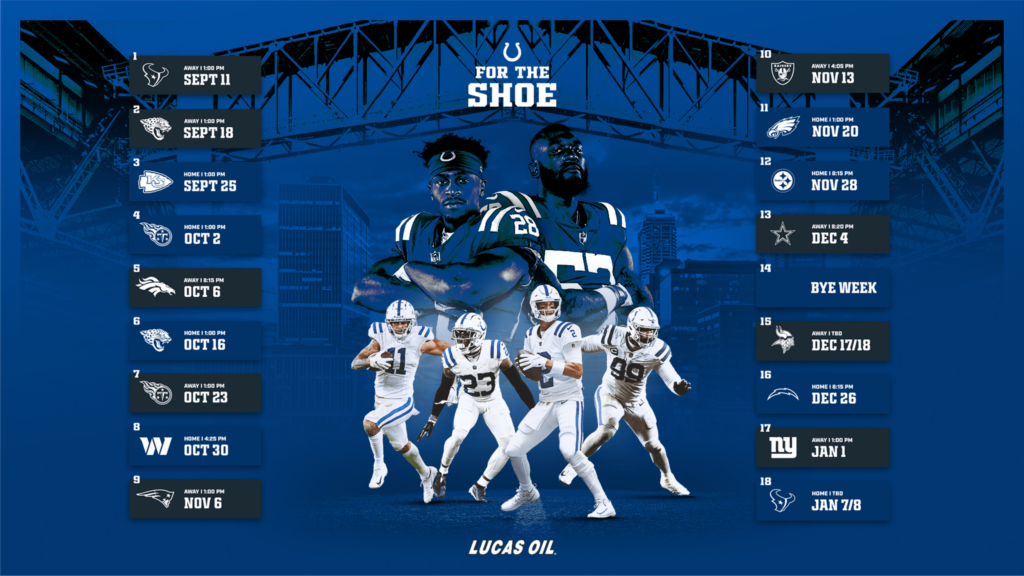 The Dennis Allen era starts this year after legendary coach Sean Payton retired. Allen’s first game as the Saints head coach will be Week 1 in Atlanta against their division rival Falcons. After the Week 1 game, the Saints play two more division games against the Tampa Bay Buccaneers and on the road vs. the Carolina Panthers. Hopefully, Saints fans like to rise early on Sundays because they have a Week 4 matchup against the Minnesota Vikings in London at 8:30 am CT kickoff. The Saints first primetime game in Week 7 is on the road against the Arizona Cardinals. Fortunately, it’s not the only primetime game! The Ravens head to town for a Week 9 Monday Night Football matchup. This is also a GameDay vodka partner game, giving us an extra reason to host a party and pour some GameDay vodka. Another primetime game is set for Week 13 when the Saints hit the road against division rival Tampa Bay Buccaneers on Monday Night Football. The Saints get a bye week after that and finish the season with two key division matchups in Week 15 against the Atlanta Falcons and on the road in Week 18 in Carolina verse the Panthers. The Saint’s entire schedule is pictured below.