GameDay vodka red & blue bottles are flying off the shelves in preparation for Saturday’s playoff game between our partners, The Buffalo Bills and the New England Patriots. Here at GameDay vodka, we love all our partners equally and would never choose sides—and thankfully now we don’t have to, we’ll just be drinking that red & blue all day instead. 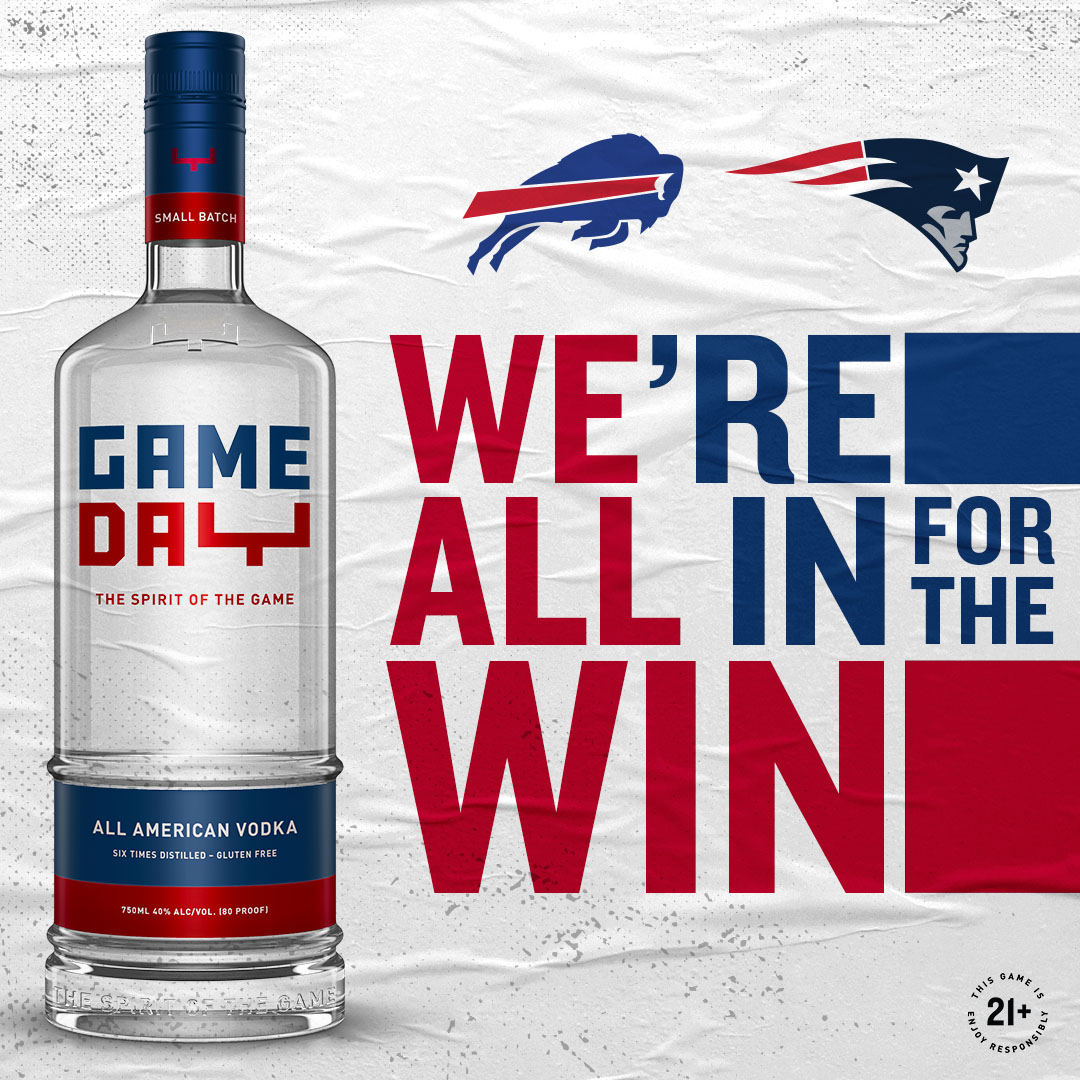 The sixth-seeded Patriots will be traveling to the Bills for Wild Card Weekend, and for the fan’s sake, we’re hoping for better weather. Despite the Bills recent victory as AFC East Champions, the last time the Patriots traveled to Buffalo, the Patriots beat the Bills. The second matchup though, in New England, the Bills came out on top forcing a pair of turnovers to clench the win.

The matchup between these division rivals’ centers on the play of defense, both of which are among the best in the NFL. The Patriots rank second in points allowed and fourth in yards allowed per game while the Bills lead the league in both categories. When the Patriots met the Bills in Highmark Stadium, Buffalo had a tough time stopping the run, but have since eliminated a lot of those explosive plays over their four-game winning streak.

Ultimately, the difference between these teams is the offense and how well they execute. Buffalo has a top-five offense and ranks third in points scored, with Josh Allen leading the team. The New England offense, despite ranking 15th in yards and 6th in scoring, have talented rookie MacJones, but a rookie nonetheless. With the Bills adding a new running game, (thanks to Allen and Devin Singletary) Buffalo will be tough to stop.

If the Patriots win on Saturday, they will likely have to go on the road to top-seeded Tennessee, which will be a tough matchup with a healthy and rested Derrick Henry in the backfield. If the third-seeded Bills win, they will likely head back to Kansas City in the second round to face the second-seeded Chiefs who just need to get past Pittsburgh in the first round. Another interesting game to keep your eye on will be the unexpected matchup in Cincinnati with the Bengals hosting the Raiders. If the Steelers do knock off Kansas City and punch their ticket to Tennessee, the winner between Cincinnati and Las Vegas would have to travel to either Buffalo or host the Patriots. Any of the teams, except for Pittsburgh, could easily represent the AFC in the Super Bowl and it would not be a complete surprise, that is just how topsy-turvy the conference has been this year.

Taking a quick look at the NFC, their road to the Super Bowl seems a bit less chaotic with top-seeded Packers on a bye and the first-round matchup between the number two seed Tampa Bay and the seventh seeded Eagles. However, the division rival on Monday night with the Rams hosting the Cardinals could be interesting. The last matchup in Dallas is a good match up too with San Francisco playing with so much heart and determination to make it to the playoffs. The Rams, who have shown they can compete with the Buccaneers have to get through the Cardinals, but both teams have had issues with inconsistency and lack of playoff experience. The pressure is on for the Packers, after losing the NFC Championship Game two years in a row and Tampa Bay, who will be the defending champions.

There are only 14 Super Bowl contenders left and we’re excited and hopeful to see our partners end up on top.